Virtual Event:  Please join us for a special event celebrating the release of The Nicotine Chronicles with editor Lee Child and contributors Robert Arellano and Bernice McFadden! Watch the event live on Facebook! 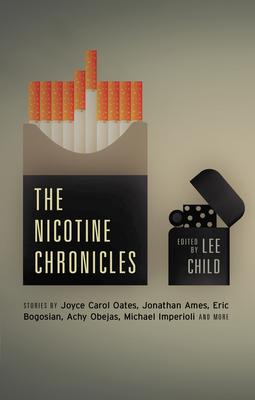 Lee Child (editor). The Nicotine Chronicles (Akashic Books, $28.95 hc, $15.95 tpk). In recent years, nicotine has become as verboten as many hard drugs. The literary styles in this volume are as varied as the moral quandaries herein, and the authors have successfully unleashed their incandescent imaginations on the subject matter, fashioning an immensely addictive collection.

From the introduction by Lee Child:

Food scientists have discovered a complex compound naturally present in, among other things, potatoes, tomatoes, peppers, and eggplants. The compound offers us a number of benefits: it improves our fine motor skills; it increases our attention spans; it improves our cognitive abilities; it improves our long- and short-term memories; it lessens depression…In and of itself, it has no real downside. It’s called nicotine. We should all get some.

The problem is the delivery system…The most efficient way is to burn dried tobacco leaves and inhale the smoke. Ten seconds later, the compound is in your brain, doing good in all its various ways. Unfortunately, the rest of the smoke doesn’t do good. And therein lies a great mystery of human behavior. To get the good, we risk the bad. Or we prohibit ourselves the good, for fear of the bad. Which approach makes more sense?

LEE CHILD was fired and out of work when he hatched a harebrained scheme to write a best-selling novel, thus saving his family from ruin. Killing Floor went on to launch the New York Times #1 best-selling Jack Reacher series with over 100 million books sold in forty-nine languages. Forbes calls it “the strongest brand in publishing.” The series has spawned two feature films and an upcoming Amazon Prime Video series. The Nicotine Chronicles is his latest work.

ROBERT ARELLANO is the award-winning author of six novels including Curse the Names, Fast Eddie, King of the Bees, and Don Dimaio of La Plata. His nonfiction title Friki: Rock and Rebellion in the Cuban Revolution, will be released in 2018. He lives in Oregon. His latest novel, Havana Libre, is the standalone sequel to his Edgar-nominated Havana Lunar.

BERNICE L. McFADDEN is the author of nine critically acclaimed novels including Sugar, Loving Donovan, Nowhere Is a Place, The Warmest December, Gathering of Waters (a New York Times Editors’ Choice and one of the 100 Notable Books of 2012), Glorious, and The Book of Harlan (winner of a 2017 American Book Award and the NAACP Image Award for Outstanding Literary Work, Fiction). She is a four-time Hurston/Wright Legacy Award finalist, as well as the recipient of four awards from the BCALA. Praise Song for the Butterflies is her latest novel.