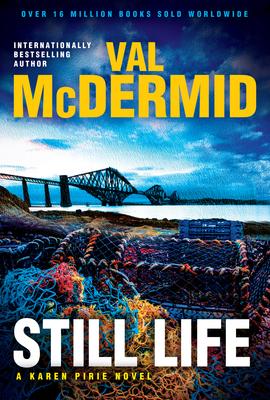 Val McDermid, there from the beginning, joins us to discuss Still Life (Grove $26 unsigned), a fabulous police procedural with DI Karen Pirie, our October British Crime Book of the Month. There will be (virtual) cake!

Val McDermid is the award-winning, international bestselling author of more than thirty novels and has been hailed as Britain’s Queen of Crime. In Still Life, McDermid returns to her propulsive series featuring DCI Karen Pirie, who finds herself investigating the shadowy world of forgery, where things are never what they seem.

When a lobster fisherman discovers a dead body in Scotland’s Firth of Forth, Karen is called into investigate. She quickly discovers that the case will require untangling a complicated web—including a historic disappearance, art forgery, and secret identities—that seems to orbit around a painting copyist who can mimic anyone from Holbein to Hockney. Meanwhile, a traffic crash leads to the discovery of a skeleton in a suburban garage. Needless to say, Karen has her plate full. Meanwhile, the man responsible for the death of the love of her life is being released from prison, reopening old wounds just as she was getting back on her feet.

Tightly plotted and intensely gripping, Still Life is Val McDermid at her best, and new and longtime readers alike will delight in the latest addition to this superior series.

Val McDermid’s novels have been translated into 40 languages, sold over 16 million copies worldwide. She has created many notable characters such as journalist, Lindsay Gordon; the private investigator, DCI Karen Pirie, Kate Brannigan, and psychologist, Tony Hill. Her books include four main series: Lindsay Gordon, Kate Brannigan, DCI Karen Pirie, and, beginning in 1995, the Tony Hill and Carol Jordan series, the first entry in which, The Mermaids Singing, won the Crime Writers’ Association Gold Dagger for Best Crime Novel of the Year. The Hill ⁄Jordan series was adapted for the highly successful television drama; Wire in the Blood, starring Robson Green.