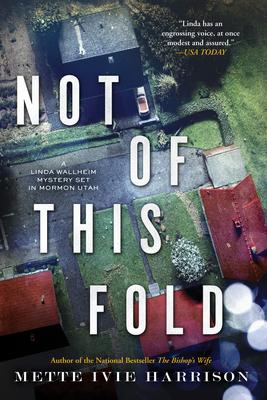 The fourth installment in Mette Ivie Harrison’s nationally bestselling Linda Wallheim mystery series, set in Mormon Utah, explores the effects of alienation, immigration, and extortion from the inner workings of the Mormon church.

Now that all five of her sons have left home, Mormon bishop’s wife Linda Wallheim has quite a bit of time on her hands, most of which she spends worrying about the state of the country and how her youngest son, Samuel, who is openly gay, is faring on his mission in Boston. She has also become close with one of the women in her ward, Gwen Ferris.

But Gwen is quickly losing faith in the church, and her issues with the Mormon power structure are only reinforced by her work in Draper’s local “Spanish ward.” The ward’s members comprise both legal and undocumented immigrants who aren’t always getting the community support they should be from their church.

When Gabriela Gonzalez, a young mother and Gwen’s friend in the Spanish Ward, is found strangled at a gas station, Gwen is paralyzed with guilt. The dead woman’s last phone call was to Gwen, and her voice mail reveals that she knew she was in danger. When Gwen decides the police aren’t doing enough to get justice for Gabriela, who was undocumented, she decides to find the killer herself. Linda reluctantly takes part in Gwen’s vigilante sleuthing, fearing for her young friend’s safety, but what the pair discovers may put them both in danger.