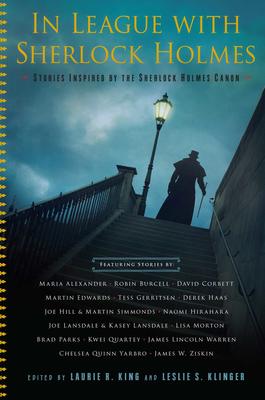 Sherlock Holmes has not only captivated readers for more than a century and a quarter, he has fascinated writers as well. Almost immediately, the detective’s genius, mastery, and heroism became the standard by which other creators measured their creations, and the friendship between Holmes and Dr. Watson served as a brilliant model for those who followed Doyle. Not only did the Holmes tales influence the mystery genre but also tales of science-fiction, adventure, and the supernatural. It is little wonder, then, that when the renowned Sherlockians Laurie R. King and Leslie S. Klinger invited their writer-friends and colleagues to be inspired by the Holmes canon, a cornucopia of stories sprang forth, with more than sixty of the greatest modern writers participating in four acclaimed anthologies.

Now, King and Klinger have invited another fifteen masters to become In League with Sherlock Holmes. The contributors to the pair’s next volume, due out in December 2020, include award-winning authors of horror, thrillers, mysteries, westerns, and science-fiction, all bound together in admiration and affection for the original stories. Past tales have spanned the Victorian era, World War I, World War II, the post-war era, and contemporary America and England. They have featured familiar figures from literature and history, children, master sleuths, official police, unassuming amateurs, unlikely protagonists, even ghosts and robots. Some were new tales about Holmes and Watson; others were about people from Holmes’s world or admirers of Holmes and his methods. The resulting stories are funny, haunting, thrilling, and surprising. All are unforgettable. The new collection promises more of the same!

Laurie R. King is the New York Times bestselling author of 27 novels and other works, including the Mary Russell-Sherlock Holmes stories (from The Beekeeper’s Apprentice, named one of the 20th century’s best crime novels by the IMBA, to 2018’s Island of the Mad).  She has won an alphabet of prizes from Agatha to Wolfe, been chosen as guest of honor at several crime conventions, and is probably the only writer to have both an Edgar and an honorary doctorate in theology. She was inducted into the Baker Street Irregulars in 2010, as “The Red Circle.”

Leslie S. Klinger is considered to be one of the world’s foremost authorities on Sherlock Holmes, Dracula, H. P. Lovecraft, Frankenstein, and the history of mystery and horror fiction. Klinger is a long-time member of the Baker Street Irregulars, and served as the Series Editor for the Manuscript Series of The Baker Street Irregulars; he is currently the Series Editor for the BSI’s Biography Series. He served three terms as Chapter President of the SoCal Chapter of the Mystery Writers of America and on its National Board. He is also the Treasurer of the Horror Writers Association and serves as Co-Editor of The Haunted Library, a series of horror classics published by the HWA.

Klinger’s work has received numerous awards and nominations, including the Edgar® for Best Critical-Biographical Book in 2005 for The New Annotated Sherlock Holmes: The Complete Short Stories and the Edgar® for Best Critical-Biographical Book in 2019 for Classic American Crime Fiction of the 1920s and the Anthony for Best Anthology in 2015 for In the Company of Sherlock Holmes (co-edited with Laurie R. King); he was nominated for an Edgar® for Best Critical-Biographical Book in 2006, two nominations for the Bram Stoker Award® for Best Nonfiction book, and is currently nominated for an Anthony for Best Critical/Non-fiction for Classic American Crime Fiction of the 1920s. His New Annotated Frankenstein was recently nominated for a World Fantasy Award. His introductions and essays have appeared in numerous books, graphic novels, academic journals, newspapers, the Los Angeles Review of Books, and Playboy Magazine; he also reviews books for the Los Angeles Times. He was the technical advisor for Warner Bros. on the film Sherlock Holmes: A Game of Shadows (2011) and served (without credit) in that role for Warner Bros.’ earlier hit Sherlock Holmes (2009). He has consulted on a number of novels, comic books, and graphic novels featuring Holmes and Dracula.