Virtual Event: Jeffery Deaver will be discussing THE GOODBYE MAN with Barbara Peters via Facebook Live.  Watch it in real time or catch it out later via FB or Youtube! 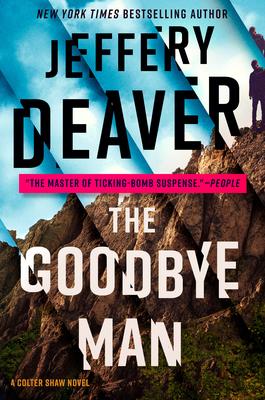 Jeffery Deaver discusses The Goodbye Man (Putnam, $28.00). In this twisty thriller from the New York Times bestselling master of suspense, reward-seeker Colter Shaw infiltrates a sinister cult after learning that the only way to get somebody out . . . is to go in.

In the wilderness of Washington State, expert tracker Colter Shaw has located two young men accused of a terrible hate crime. But when his pursuit takes a shocking and tragic turn, Shaw becomes desperate to discover what went so horribly wrong and if he is to blame.

Shaw’s search for answers leads him to a shadowy organization that bills itself as a grief support group. But is it truly it a community that consoles the bereaved? Or a dangerous cult with a growing body count?

Undercover, Shaw joins the mysterious group, risking everything despite the fact that no reward is on offer. He soon finds that some people will stop at nothing to keep their secrets hidden . . . and to make sure that he or those close to him say “goodbye” forever.

A former journalist, folksinger and attorney, Jeffery Deaver is an international number-one bestselling author. His novels have appeared on bestseller lists around the world, including the New York Times, the Times of London, Italy’s Corriere della Sera, the Sydney Morning Herald and the Los Angeles Times. His books are sold in 150 countries and have been translated into over twenty-five languages. He has sold 50 million books worldwide.