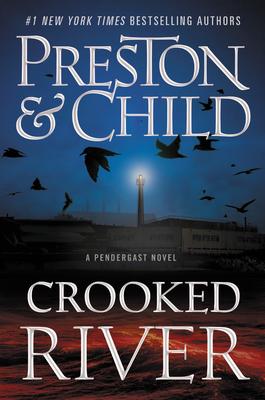 Dozens of identical blue shoes are found in the ocean off the southwestern coast of Florida, all with a severed human foot inside, all exhibiting unmistakable signs of violence. They appear out of nowhere one day, floating in on the tide as if appearing out of nowhere.

Called off the tarmac from his return flight back to New York City, Pendergast reluctantly arrives on Captiva Island and is quickly drawn into the mystery. A preliminary pathology report indicates the feet were wrenched from their bodies in the crudest of ways. As the days continue, more wash in until the number tops one hundred.
Soon, Pendergast and his partner, junior agent Coldmoon find themselves squaring off against an adversary more powerful and deadly than they’ve ever encountered.

The thrillers of Douglas Preston and Lincoln Child “stand head and shoulders above their rivals” (Publishers Weekly). Preston & Child’s Relic and The Cabinet of Curiosities were chosen by readers in a National Public Radio poll as being among the one hundred greatest thrillers ever written, and Relic was made into a number-one box office hit movie. They are coauthors of the famed Pendergast series, and their recent novels include Verses for the Dead, City of Endless Night, The Obsidian Chamber, and Blue Labyrinth. In addition to his novels and nonfiction works (such as The Lost City of the Monkey God), Preston writes about archaeology for the The New Yorker and National Geographics magazines. Lincoln Child is a Florida resident and former book editor who has published seven novels of his own, including such bestsellers as, Full Wolf Moon and Deep Storm.