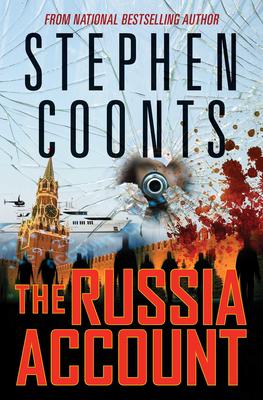 Stephen Coonts’ newest novel The Russia Account pits CIA officer Tommy Carmellini against a murderous, international financial conspiracy that leaves a trail of death and corruption, extending from a small bank in Estonia, to the highest reaches of the Kremlin, to the halls of the Congress, and perhaps even to the CIA itself — putting Admiral Jake Grafton, the head of the CIA, in the crosshairs of an assassin.

Burglar turned CIA warrior Tommy Carmellini has starred in eight previous Coonts’ thrillers, from Liars and Thieves to Coonts’ latest from Regnery, The Armageddon File.  Realistic, passionate, in love with life, Tommy struggles in our turbulent age.  Critics have labeled him a “hip, modern hero.”  With the help of his mentor Jake Grafton, up to now Carmellini has always managed to foil his enemies. Discovering and defeating the powerful forces behind this massive, blood-stained financial conspiracy that threatens the very foundations of the United States government will be his most difficult challenge.  Perhaps, he suspects, an impossible one.