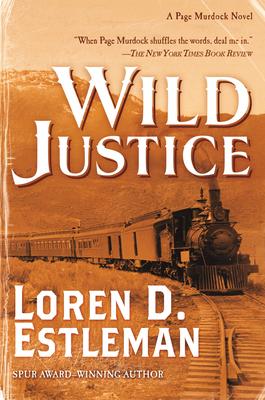 In the spring of 1896, after thirty years spent dispensing justice in the territory of Montana, Judge Harlan Blackthorne expires, leaving Deputy U.S. Marshal Page Murdock, his most steadfast officer, to escort his remains across the continent by rail.

The long journey—interrupted from time to time by station stops for the public to pay its respects and for various marching bands to serenade the departed with his favorite ballad, “After the Ball”—gives Murdock plenty of opportunity to reflect upon the years of triumphs and tragedies he’s seen first hand, always in the interest of bringing justice to a wilderness he, his fellow deputies, and the Judge played so important a role in its settlement.

As the funeral train chugs through prairie, over mountains, and across rivers once ruled by buffalo herds, Indian nations, trappers, cowboys, U.S. Cavalry, entrepreneurs, and outlaws representing every level of heroism, sacrifice, ambition, and vice, Wild Justice provides a capsule history of the American frontier from its untamed beginnings to a civilization balanced on the edge of a new and unpredictable century.